Today is the last day of National Domestic Violence Awareness Month. Unfortunately however the effects of living with domestic violence extend far beyond just a month. They can last a lifetime.

What is Domestic Violence?

Domestic violence is not limited to intimate relationships between partners. And it’s effects can show up in many other forms besides physical abuse. It’s emotional abuse with yelling, put downs, shaming words and gestures, humiliation, stalking, manipulation, coercion, threats and isolation. It can be financial abuse, underpaying an employee, using cash or withholding money to control people, devaluing people’s work and contributions, ridiculing them, stealing their money, harassment, keeping tabs online, non-stop texting, phone calling, Using manipulation tactics like guilt, shame, the silent treatment or calling someone stupid are all examples of domestic violence.

As an incest and domestic violence abuse survivor myself, I know that the consequences of living with memories of abuse can be devastating and cause havoc and chaos in your life. I’ve spent decades working to heal and make myself whole again. I’ve come to accept that it’s a process and the best thing anyone can do is learn how to deal with the stress in their life.

As a coach specializing in working with women after abuse, I’m always on the look out for other survivors to share their stories of how they have overcome adversity and abuse in their lives. I believe that we learn and are inspired by each other’s stories. My friend and colleague, Rhina Valentin is a great example of not just a survivor, but a thriver.

Rhina is the Founder and Creative Director of La Reina Del Barrio Inc. Every Friday for the past 10 years she has been the Cafe con Leche television personality and host of the award-winning news and talk show, “Open Friday” on Bronxnet TV. A true leader and pioneer, Rhina has been honored and revered for her place in Bronx history as One of the Bronx’s 25 Most Influential Women. 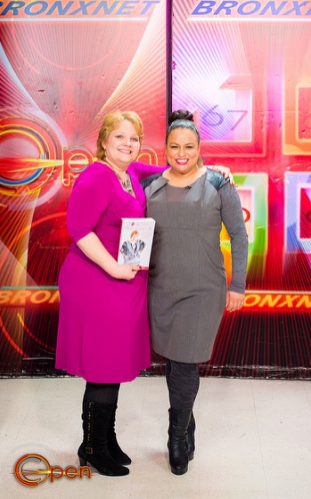 I first met Rhina back in 2013 while I was promoting my women’s empowerment book, “Lovin’ the Skin You’re In” She interviewed me for her show and I shared a bit about how I overcame a background history filled with sexual abuse.

Following our interview she told me that she was a passionate advocate for domestic violence awareness. She invited me back to the show for several other interview segments and each time we spoke, I felt more of a kinship with Rhina.

Over the years I’ve followed Rhina on social media and have seen many of the amazing things that she does to promote and support her community. I’ve been blown away and inspired watching her self-produced and self-directed reality TV web series, “Rhina Gets Lean.”

In rare, raw footage, Rhina shared her journey of regaining her health right after giving birth to her daughter. Letting her viewers see all the ups and downs involved in gradually moving toward a goal, Rhina set a new standard for achievement, bringing realism and honesty to accomplishment.

And in true Rhina style she ended the series with a bang by closing out her last season setting a huge goal to run and finish the NYC marathon. A year later she manifested that goal and made it happen.

All that Rhina does is filled with love and light. She’s a transformation agent. Her message is simple and it comes straight from the heart. “If Rhina can do it, then you can too.”

She wants people to believe in themselves to know they can rise above their circumstances. As a passionate fighter for the underdog, she’s always there with words of encouragement inspiring people to share their stories and make their voices heard.

Since I met her, Rhina has been my role model and a huge inspiration in my life.

In January 2016 I caught up with Rhina and was able to interview her. Here is Rhina’s story of how she survived an abusive relationship and gained the strength and courage to soar to the heights she now enjoys. Watch the video to see her tell her story.