Nine Bags of Chips: My Cry for Independence 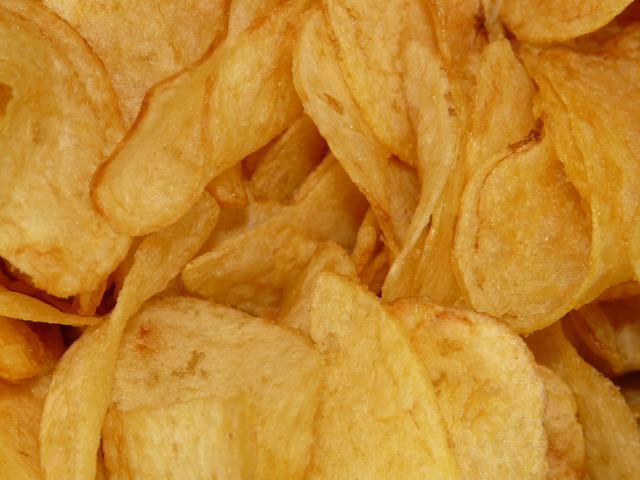 Do you try to keep the foods you love at arms’ distance in an attempt to avoid temptation? How is it working for you?

I lived for years in fear of food, swearing on a stack of bibles that I couldn’t be trusted around food. Do you ever feel that way? Can you relate?

I’ve struggled with my own disordered eating and this horrible black and white thinking diet mentality for over thirty-four years. As of today, I’ve been in recovery from my food addictions for 14 years. I first made the decision to stop dieting in August of 2006. Through this process, I’ve discovered my freedom.

I have moved way beyond knowing I can trust myself around an open bag of M&Ms or a bag of chips, or even a fresh baked batch of chocolate chip cookies, brownies, or cake. I now know my favorite ice cream can actually develop freezer fuzz while standing for weeks uneaten in the freezer in my home.

In the early part of this process, I ate chips compulsively. At one time, I had nine bags of chips in my cabinet: Doritos, Fritos, Lays potato chips, taco chips, Baked Cheetos, Fried Cheetos, cheese twists, Garden of Eatin’ blue corn chips, and pita chips. I ate all of them constantly. Each time I passed the kitchen, I grabbed another handful, completely disregarding my hunger. As time passed, I began to just eat them occasionally with a sandwich.

Eventually, I discriminated even more. A single taste would tell me it was too salty, or too cheesy, stale, the wrong size or shape, too thin or too thick, too twisted or too flat, too greasy, too, too, too. For months afterwards I would know I no longer liked them. I kept them in the cabinet and did a quick mental count each time I opened the door.

Those nine bags of chips helped me thumb my nose at the well-meaning but ignorant things my dad and stepmother, Rosie, pressured me to do in the name of staying on my diet. They told me they counted all the potato chips in the house. They made me eat broccoli with lemon for lunch and cut the fat off my steak because they wanted to help me lose weight. Those nine bags of chips were a shout out against them.

Those Chips Were My Cry for Independence

In 1973, when I moved in with Dad and Rosie, it was only about three months after my mother and stepfather, Jorge, had gotten married and moved to Florida. Over those three months I had gained thirty pounds. Nobody but me knew that I was trying to build a wall of fat to protect myself from my pedophile step father and his creepy friends. I had experienced a lot of horrible sexual abuse, so living with my father who I loved and trusted was a dream come true.

Being put on a diet was no big deal. I could live with the discomfort of that. No problem. Once I started dieting, chips were among the first things to go, yet because Rosie was slim and Dad loved junk food, the foods I loved were always in the house, but I couldn’t have them. Ah…so close and yet so far. Boy did I want them, so I did whatever I could to get them.

Being the resourceful gal I am, I wangled my way around every obstacle and planned my food attacks. Whenever Rosie would go downstairs to do laundry and leave me in the house alone, I raided the cabinets and refrigerator and shoved handfuls of tempting goodies, M&Ms, cookies, donuts, bagels, cold leftovers in my mouth, just waiting to hear the outside elevator door close and listening for her key in the lock.

One day, Rosie came back from the basement after folding the clothes and called me into the kitchen. She had a strange look on her face. It was the serious one that intimidated me.

I searched her eyes for clues as to what she was thinking. Her big brown, warm lovable cow eyes told me something was brewing but I couldn’t tell what it was. I knew I was in some kind of trouble.

Breaking the tense silence, she said, “Andrea, did you eat any of the potato chips?”

Then she asked me again with her voice a little firmer this time. “Andrea, did you eat any of the potato chips?”

Then she asked again, “Andrea, tell me the truth. Did you eat any of the potato chips?”

I swore up and down that I hadn’t.

Then she said, “Andrea, I counted them.”

I broke into sobs and confessed my guilty sin. At which point, she laughed and told me, “Silly — how am I going to count potato chips?”
Stung by my own innocence, and heaped on top of buckets of shame, I now felt stupid. This is the reason those nine bags stayed in my house even after I knew I didn’t like them anymore. Now, knowing that I’m not a human garbage can indiscriminately devouring everything in my path, I am finally finding out for the first time who this Andrea really is.

Depression and a nearly 40 pound weight gain was the blessing and wake up call I needed to realize I had been numbing my feelings with food over the past several years. And despite the fact that I have a strong stand on self-compassion and body acceptance, the intensity of my grief over my estrangement with my father made it nearly impossible for me to stop binging on ice cream and chips.

And despite that fact that I am a coach and I teach women how to use stress-relief techniques to deal with their stress I was resisting and refused to help myself by using the tools that had worked for me.

As I became aware of the rising numbers on the scale, I knew my health was paying the price. I could feel the answer in my bones was to push myself beyond simple self-compassion. I had to actually start making changes. I had to show kindness to myself by reaching for higher ground to get healthier.

I learned that self-compassion was not enough to reverse the trend of my feeling sick and tired all the time. That’s when I started to do a real house cleaning and get serious about being healthy. As it turns out the biggest thing that was causing my overeating was all the drama that was going on in my life. Years wasted grieving toxic relationships was basically killing me.

When I finally let go of needing my narcissistic father’s love and approval, it became so easy to want to take care of myself. Loving myself became easy. Over the past year I’ve lost more than 20 pounds and completely changed my eating habits. I could not have done this if I didn’t use the foundational principles I teach in my Losing Weight without Dieting Program. But it was this past year that made me realize that there were more important lessons that needed to added. That’s why I decided to reboot my Losing Weight without Dieting Program and share it with you.

Today I know the reason why I crave healthy food is because I know that I have a choice. No food is forbidden in my home or in my life. At the bottom of my pantry closet is a blue bucket that I call my binge bucket. It has a variety of my favorite crave foods; Cheese Doodles, corn chips, Lay’s potato chips, fruit jellies, Milk Duds and other goodies. I always keep those foods in my home.

When I first stopped dieting back in 2006 I used to have them all over the counter tops, but now I no longer need a physical reminder to know that they are there for me if and when I need them. More often than not, I end up tossing the stale remainder of the bag into the garbage and replacing it with a fresh bag. But I know that the reason why I am so passionate about eating healthier is because I have my junk food if I want it. Now I know the difference between being out of control around food and at peace is the self-care steps that I teach for self-preservation. Dealing with your stress often and always is a must. Without that step, food will always control you. Now I want to share my lessons and discoveries with you. I create workshops for women to end food obsession.

Do you struggle with feelings of shame around wanting to eat certain foods? Do you feel the need to protect yourself by keeping those foods out of the house? Trying to deny your cravings when they rush over you  like a tidal wave is an exercise in sheer torture. Isn’t it? Have you ever thought about what would happen if you stopped denying yourself and gave yourself permission to eat the foods you love?

For me, it was chips, for you it may be cookies, Grandma’s blueberry pie, Mom’s Sunday lasagna or some other food you feel you’ll never get enough of. If you’re depriving yourself and trying to avoid that food, it’s holding your happiness hostage. As long as you feel you have to keep your distance, you’ll never know who’s really in control. Here’s why: There are real reasons why you crave the food you do. Those foods are associated in your memory with love and happiness. And if you’re an emotional eater, then you know that those foods seem to cry out to you to eat them when you are at your most vulnerable points.

That’s why if you’ve spent any length of time dieting and trying to avoid the foods you love, you’ve been fighting a losing battle. You haven’t failed at dieting. Dieting has failed you. Diets won’t teach you how to handle the emotions that make you feel like you have to eat all the time. Deprivation isn’t the answer because it only makes the food more alluring, more tempting, more forbidden. And that will only increase your level of desperation to get it and eat that food until it is all gone. Depriving yourself of the food you love keeps you on a hamster wheel of endless cycles of deprivation and binging. To break free of the cycle, you have to  learn how to make peace with all foods. That means giving yourself permission to buy the foods, keep them in your home and have them accessible any time you want them. I understand how scary this can sound, but permission is power.

I’d like to show you how to make friends with food so you won’t feel powerless over your cravings. I want to teach you another way to handle your emotional eating and show you that there is a much gentler and more effective alternative to dieting. You never have to feel deprived or hungry again.

If you are tired of living with so much body shame and food obsession, and you’re looking for a safe space to share and get inspired to take small steps to better health, I invite you to join my new FB group, “Baby Steps to Lovin’ the Skin You’re In.