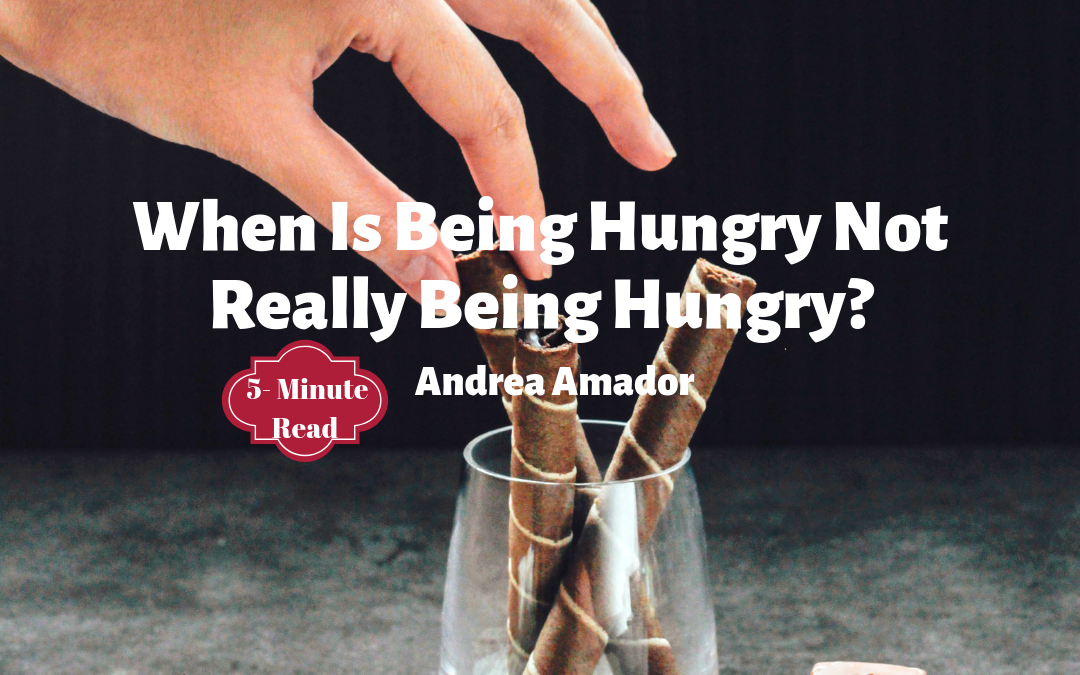 If you can relate to beating up on yourself all the time because you’re always looking around for something else to eat or snack on, you’re not alone.

A lot of people automatically assume if someone is overweight and they’re always hungry, that they must be greedy and have no self-control. That’s not true. You’re not a greedy pig, a human garbage can, or any other body shaming insult that may have been hurled at you in the past. Don’t let anyone call you names that’s just mean and nasty and you don’t deserve that kind of disrespectful treatment from anyone, especially yourself.

If you’re always hungry or looking for something to pick on, it’s because you have lost touch with the sensation of your body’s physical hunger. No reason to feel ashamed.

• Do you often feel sluggish and tired all the time?

• Can’t stop thinking about food? Cravings got you by the nose?

• Do you take huge mouthfuls of food, and often swallow without chewing?

• Do you find yourself binging and overeating many times throughout the day?

• Do you often exercise more so that you can eat more?

• Are you usually moody, depressed, irritable, grouchy, or angry?

If your answer was, “yes” to most of these questions, there’s a good chance that you’re walking around hungry too often without even knowing it. The result of all this emphasis focusing on everything outside of your body, shuts down your awareness to what is actually going on internally. With all that shouting in your head, it’s difficult to hear the soft whispers of your body until your hunger becomes so ravenous that you end up eating everything that’s not nailed down.

I Believed I was a Human Garbage Can

I can so relate. As long as I was dieting, I always used to think that my hunger was bottomless. I never felt satisfied with any amount of food I ate so I typically overate at every meal. I used to be terrified at the prospect of getting hungry.

I can’t tell you how many times I’ve heard my Weight Watchers® leaders say to our group, “Never let yourself get too hungry.” I bought into it, hook, line and sinker. I was actually afraid of getting hungry even though I was over 60 pounds overweight.

I Was Afraid of My Hunger

Consequently, I carried food with me all the time. I seized on every opportunity to eat even if I didn’t like the food; all because I had this pervasive fear that I never knew when I was going to eat next. There are so many ways that dieters are encouraged to distrust their bodies, but fearing your hunger is probably the most damaging because it keeps you in a cycle of overeating and bingeing.

You don’t have to depend upon a diet or weight control plan to tell you when, how much and what to eat. Your body has its own clock and way of telling you when it wants to eat. Most likely through years of dieting that sensitivity has been dulled down and anesthetized.

The truth is, by obsessing over a rigid eating schedule you are actually messing around with your body’s delicate metabolic balance. Eating by the clock will throw off your ability to know when you are actually physically hungry, because you’ll be walking around semi-stuffed all the time. Think about it. If you’ve eaten your lunch and throughout the afternoon you’ve been snacking on pretzels, jelly beans or anything else to ward off the dreaded hunger, by the time dinner rolls around you won’t know when to stop eating, because you began eating the meal when you were already full.

You Have to Give Yourself Permission to Get Hungry

In order for your body’s internal satisfaction switch to trigger, it has to first recognize the sensation of hunger. That basically means that you have to let yourself get hungry and learn to recognize those sensations in your body.

In their book, “Intuitive Eating: A Revolutionary Program that Works,” co-authors, Evelyn Tribole, M.S.R.D. and Elyse Resch, M.S.R.D.F.A.D.A., say, “A dieting body is a starving body.” This is because when you’re on a diet, your body doesn’t know that food is plentiful. It is fooled into thinking that you’re in the midst of a famine and your body responds accordingly by adapting and changing the way it functions, conserving energy to compensate for the lack of fuel.

Have you ever eaten yourself into what I call a ‘food coma’? That’s the point at which you’re passed out on the sofa or feeling the pain of nausea or you just can’t get up because your body is so bloated that your stomach feels as big as a beach ball about to explode. I know I’ve been there because I feared that I would never be able to eat that food again, so I had to eat as much as I could while I had it. How ‘bout you?

In order for you to avoid this situation, you’ve got to re-establish trust with your body so that it will stop reacting as though it is starving. You have to give yourself permission to get hungry so that you can reconnect to your body. By doing that you will be helping your body get realigned so it can return back to healthy functioning. Your first step to doing this is to become aware of the different signals your body uses to indicate that you are physically hungry.

How Biological Hunger Shows Up in Your Body

Tune into your body Pay attention to how you feel often. Each time you eat, ask yourself, “Am I hungry? What’s my hunger level? Remember a time when you felt hungry once before. Think about how your mouth felt, how did your stomach feel? If you can’t pinpoint those specifics, then the following list shows some general guidelines of body signals indicating hunger. I also recommend using The Hunger Scale. I’ll share this with you in an upcoming post. This is a numbered scale that measures different levels of hunger by defining what is occurring in the body.

I’ve listed them in order of intensity from mild to severe as follows:

These physical reminder sensations occur when you haven’t eaten a meal for between 5-9 hours. That simply means that the body’s reserves of energy are depleted and you need to eat to alleviate the uncomfortable feelings.

When you’re eating and experiencing conflicted or intense emotions, it’s not your body that’s pushing your hungry buttons. This is because, rather than being driven to eat by your body’s physiological needs, you are getting triggered by your need to eat whenever you’re under stress. This is what is known as emotional eating. Besides emotional eating, there are several other types of hunger that we all experience to some degree or another. If you are an emotional eater, you will feel especially vulnerable and pressured to eat in these situations:

Taste hunger – When you eat because it just tastes so darned good or because you want to fit in with what everyone else is doing. You want to be sociable – Many people feel like a birthday’s not a birthday without eating a piece of cake. And a day at the ballpark has to include chowing down on hot dogs. And most people would agree, that a movie is not as much fun unless you’re eating popcorn. There are lots of occasions when people feel pressured to eat even when they know they’re not hungry. Think of the bride who eats her wedding cake despite being hungry – it’s perfectly okay and understandable. Everybody eats to be sociable and gets carried away sometimes.

Practical hunger – When you’re eating according to the clock. For example, you look at your watch and say, “Oh it’s 12:00, it must be lunch time” How hungry you are, is entirely dependent upon when you ate last and how big the meal was. Your stomach has an internal clock that is very different from the watch on your wrist. By eating on automatic, you are not listening to your body’s signals. To determine if you’re really hungry, ask yourself, “When was the last time I ate, and how does my body feel?

If you want to synchronize your stomach’s hunger with your social plans, then eat smaller meals during the day. I like to call this, “eating to fill a corner, rather than a cavern.”

Emotional hunger – This is eating in order to squelch the volume on uncomfortable and overwhelming emotions ranging from sadness to joy. The only way to deal with this type of hunger is to cope with the stress in your life and to legalize all foods so that they won’t be so deeply emotionally burdening to you.

Remember learning how to master food and feel safe around what you may now consideration ‘temptation’ is a process. It’s also a wonderful opportunity to learn a great deal about yourself. To my way of thinking, self-acceptance begins by making peace with food.