Master Your Mirror to Change Your Inner Critic’s Voice 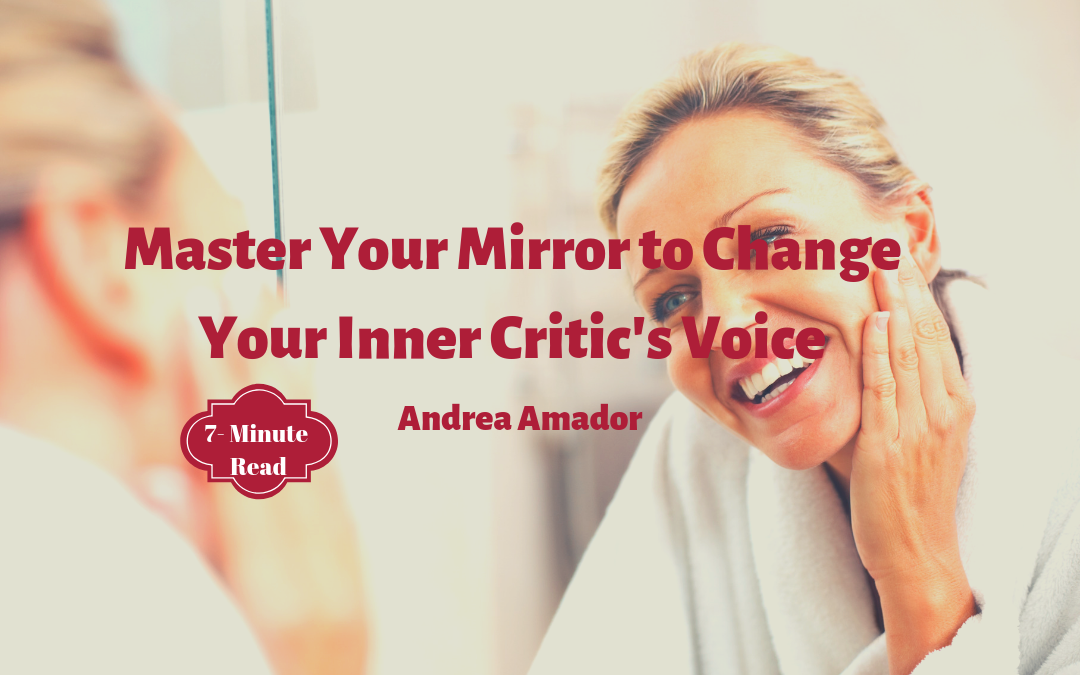 Have you been aware that you have a tendency to beat up on yourself? According to research most people have what is known as an inner critic. This is generally a negative internal dialog that seems to keep a running tally of all your weaknesses, flaws and mistakes. The good news is you can get control of it. Let me tell you how to tame your inner critic and transform it into a loving coach.

If you’re like so many people, you’re aware of an internal voice inside your head that constantly reminds you of what you’ve done wrong, why you’re not okay and why everyone else is better than you… at everything. In the privacy of your mind, you’re probably thinking that because you’re not perfect, and haven’t accomplished everything you set out to do, that something is wrong with you. That’s so not true. But it’s really hard constantly fighting your inner critic. You never seem to win and you always end up feeling so badly about yourself. Right? It’s so stressful. You just can’t seem to win in a fight with your inner critic. It’s like always being yelled at. Wouldn’t it be nice if you could change that voice inside and make it kinder?

Why Change Your Internal Voice?

When you speak to yourself in a loving and respectful tone of voice, you’ll be more relaxed, at ease and feel good. Those are the happy chemicals floating  throughout your body creating that feel-good state.

But when you yell at yourself and draw attention to your imperfections and flaws, that makes you feel badly. Anything that upsets you and makes you feel threatened, triggers your brain to activate your body’s stress response. Different strokes for different folks. For some people, food is their body’s quickest way of trying to reset itself and feel good again. For others it’s smoking, drinking, drugs, TV, internet, sex or spending. Whatever is quickest and has worked at least 3 times in the past, will most likely be the behavior you’ll gravitate towards without thinking. Don’t waste your time blaming or shaming yourself. That’s just going to hurt you more and keep you stuck in the same patterns. The key to getting yourself out of the muck and mire is to break the cycle of anxiety by recognizing that you are a person worthy of being treated with respect and dignity. That’s all any of us really wants anyway.

Whose Voice Is In Your Head?

Give it some thought. Whose voice are you walking around with each day? When you say or do the wrong thing, whose voice automatically pipes up and what does it say? When someone gives you a disapproving stare or you hear ‘that’ tone in their voice, what are you saying to yourself and how are you saying it?

Is it a loving, gentle, soft voice or is it angry, grating, hateful and hurtful? Most of us can relate to having an inner drill sargeant just itchin’ to beat us up  and lay us out to dry for the slightest mistake.  Let me give you some insight into where that voice came from.

Where Did It Come From?

The things we tell ourselves and the way that we speak to ourselves in our most private moments in our head is a result of what we have learned from the past. If in the past, you’ve been criticized and shamed by others, you will learn to talk to yourself in the same way.

In many ways we unconsciously become our parents or those with whom we spent the most time growing up. You may even be repeating hurtful names people have called you, and made them your own.

Now You Have a Choice

Unfortunately kids don’t come with instructions, so many parents have to first screw things up in order to get it right. They probably had their own problems. You may have been the kid who was the experiment and the siblings that followed may have derived the benefit of the better and more refined parenting skills.

Some people never get it right. I know it may not seem like it, but we’re all doing the best we can with what we know. When you know better, you do better. That’s not said to justify any bad or hurtful behavior, but for you to realize that holding onto the past will really only hurt you so it’s in your best interest to let go of all the stuff that hurts and choose what feels good to you.

Any memory you have that is charged with strong emotions will have a powerful influence on your behavior. Maybe you grew up around people who weren’t very tactful and gracious in their communication skills. Maybe they spoke to you unkindly or you heard them speaking to others that way. They may have justified their harsh tones by saying this was a way of ‘motivating’ you or others. It probably just scared you and made you feel badly. But you don’t have to keep on acting out that same parent/child dynamic in your head anymore. Now you’re the one in charge and you can re-parent yourself to do the things you want in a loving way. So now you can stop beating up on yourself.

How to Tame Your Inner Critic

You’re no longer a child. If something doesn’t work for you, you have the power to change it. As a kid, you were a victim of the voices, and couldn’t speak out against your elders or express yourself because that may have been considered inappropriate. Now the good thing is you have a choice and you can fire that inner critic and turn them into a loving coach.

The first step to making a change is becoming aware of old un-useful patterns. Pay more attention to what you hear yourself saying in your head. Many times we are not even aware of what we are thinking, until we actually pay attention.

Once you let go of the emotional baggage that keeps you tied to feeling the need to punish yourself, it will no longer feel right to be spoken to in the same way, by yourself or others.

Whenever you notice that you feel anxious or uncomfortable, tune in and become aware of your self-talk. These are the thoughts and conversations that bubble up to the surface of your mind. This is known as your inner critic. Science has proven that most people generally talk to themselves about 10,000 x a day. The mood of the conversation is usually negative. By becoming aware of what your inner critic is saying, you can transform those negative jabs and make them positive.

Your self talk is like a running dialog or commentary that you may have noticed that goes on inside the privacy of your mind. It comes from a part of your personality that has been attempting to protect you from getting hurt. It may not seem like it, but it has a positive intention in trying to keep you safe. It is up to you to redirect that part of you to remind it that you’re no longer a kid and now you are the boss. One of the ways to do that is to question that inner voice.

During one of my coaching trainings to become a Master Practitioner of Neuro Linguisitic Programming, Rachel Hott, Ph.D, my instructor led our group through an exercise designed to make us aware of our self talk. Rachel wanted to teach us that our self-talk was not necessarily true and that we could change the way we felt about ourselves and build more confidence by repeating the words we heard coming from our inner critic and changing the inflection of our voice to turn our inner critic’s statement into a question.

I’ll share a running negative statement that I used to hear my inner critic shouting at me. One day I looked in the mirror and I was aware of a voice in my head shouting, “I hate you, you fat pig.” My NLP peers encouraged me to change that hurtful statement until it no longer upset me. This is what I did.

Rather than just ending the statement with a question, I added several question marks to the statement. This is the change I made that neutralized the old hurtful effects of the old statement.

By adding question marks to several segments of the sentence, it completely changed the way I felt about the old statement. Now I never hear my inner critic say anything that is hurtful or a put down.

Think about someone who embodies a special loving quality and compassion whose voice you would like to have as your guide. That’s right. I’m asking you to quiet down that old inner critic and substitute that whiny voice for a lovely pleasant voice that will inspire you to be your best self.

Imagine talking to yourself lovingly and gently. I used to walk around with my father’s critical voice in my head and now I’ve chosen to substitute his voice with my Nana’s.  Whose voice would you choose? Your mother’s, best friend’s, an old beloved teacher or mentor? It doesn’t matter whose voice you choose as long as it makes you feel warm and loved. By doing this little exercise and making this small change, you’ll be amazed to notice how much resistance just melts away.

Try It! It’s Your Turn

Notice the next time you become aware of how your inner critic is affecting you. Does it sound like anyone you know? Is it saying mean things? Have you heard it before? Write down what you hear and look at the statement. Think of how you can break up the statement into segments using a question mark between the words.

Then think about a loving and nurturing person whose voice would be a motivational delight. Tell your current inner critic that you deserve respect and won’t tolerate being put down anymore. Give it a choice and let it know that you realize it’s been trying to help you but you want it to change it’s tone. Offer it a new job and say, from this point on, you can be in charge of motivating and inspiring me. Give it the option to either stay or go. If it stays, it will be taking on a new voice and way of speaking to you.

Next think about someone who embodies a special kind quality and compassion whose voice you would like to have as your guide. Imagine hearing that voice everytime your inner critic has something to tell you. Test it out first with the statement that you wrote down earlier. Repeat that statement being mindful to separate each section and end that section with a question.

By changing your inner critic you will transform the way you treat yourself.  It will give you a heightened awareness that you deserve respect and to be treated with kindness.

It’s not easy and it takes some practice. I know. But you’ll feel so good when you start talking to yourself in a more loving and gentle tone.

Ready to stop all the pain of beating up on yourself? Whether your challenges are with the size of your thighs, or the wrinkles and bags ’round your eyes, join my Facebook Lives so you can reclaim your power from the mirror and tame your nasty inner critic. Click the image below to join my new Facebook Group: The Juicy Woman: Confidence Coaching for Women Over 50