Pay Attention to How Food Makes You Feel 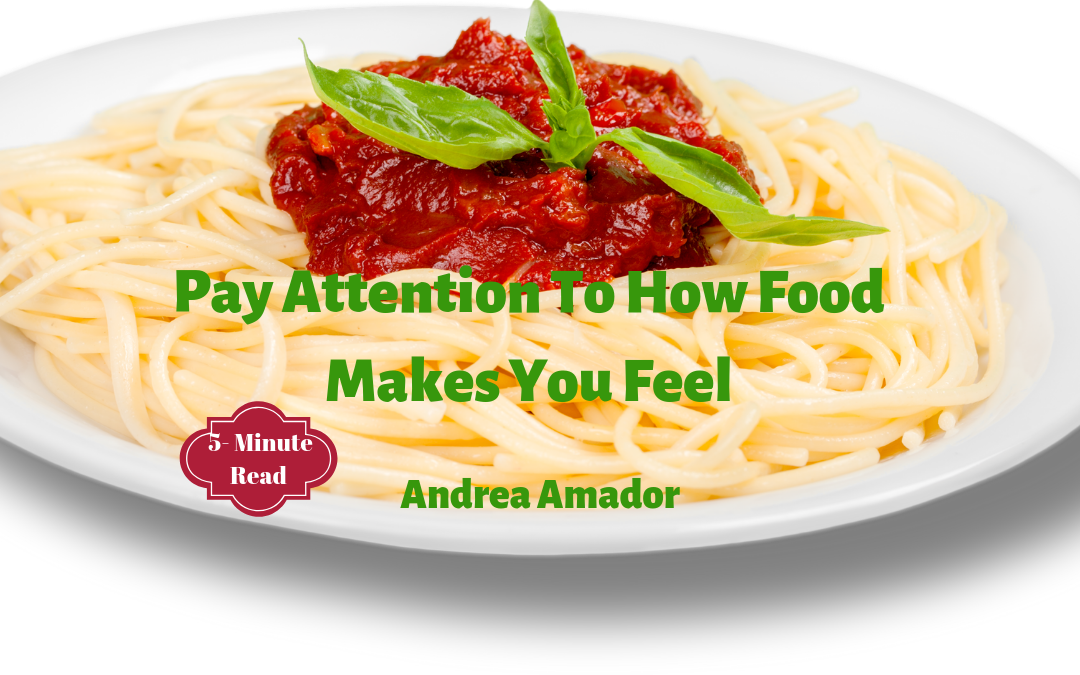 Have you been struggling with trying to change your eating habits and find a way to eat healthier? It’s really hard. Isn’t it? I know–for me too.

I’ve spent years on and off diets and then in 2006 I made the decision to stop dieting and vowed that I would learn how to trust my body and make peace with food.

It sound easy, but it’s not, especially if you’re like me, and you’ve spent years feeling ashamed and embarrassed trying to disown and separate yourself from your body. I was raised in an alcoholic and abusive family and the anxiety and stress of living in that environment has carried through my life and tainted my relationship with food and my body.  Trust wasn’t something that I learned from living in my family. Food has always made me feel safe so for years I had a huge problem with bingeing.

Once I stopped dieting, and gave myself permission to eat the foods I loved, I began to realize that they just didn’t taste as special as I wanted them to. So I quickly became a very discriminating eater. But whenever I got stressed and something triggered my anxiety, I would overeat because I just wanted that sensation of fullness to feel safe.

Perhaps the biggest problem that I encountered on my road to learning to make peace with food was that I never felt satisfied and ending a meal or a snack always made me feel sad and a little deprived. I wanted to keep eating despite the fact that I was physically full. Can you relate?

Now I know from years of wrestling with my own challenges, that my issues with food have always been around emotional eating. Whenever the stress in my life would become too intense, I would find myself eating again. Food has always been my refuge.

Until last year I never realized how the stress in my life was largely due to my compulsion to take care of everyone and everything around me. You could say that I have been quite a control freak and definitely guilty of doing too much for far too many people who didn’t even want my help. I think that in some way I’ve been addicted to the drama.

I finally got the message last year to stop trying to take care of everyone else, and instead, invest in taking care of me. It’s been blissful.

Since doing that, I’m amazed to see how my food preferences have changed effortlessly. Last year I initially made the decision to go meatless to protect the animals. Then after a few months passed, I learned about the negative health effects of eating a traditional Western diet of meat, cheese and dairy.

So I embraced a whole foods plant-based style of eating. It’s plant strong, not plant perfect. That means that in addition to eating fruits and vegetables, I also eat foods that are processed. But I recognize that processed food are not very healthy so I’m committed to eventually going vegan to eliminate all health risks.

Since weaning myself off of the drama in my life, it’s become second nature to me to eat in a way that makes me feel good more often than not. I like the feeling of lightness and space and feeling energetic as opposed to feeling heavy, weighted down and exhausted. So gradually over the past year I’ve stopped eating the foods that give me that sense of feeling heavy and weighted down.

About 4 months ago on my journey to becoming a vegan, I was working to figure out how to manage further reducing processed foods in the form of carbs.

As an Italian, pasta and pizza were always favorites of mine. Anything pasta has positive associations for me. My Nana used to make home made pasta and gravy on Sundays and everyone would gather at her house for dinner.

Friday nights are usually take out at our house and many times because we love the local pizzeria, we often order pizza. But since I’ve been switching to a vegan diet, I want to wean myself from my habit of ordering pizza, because I don’t want to eat the cheese.

One Friday night I hadn’t planned anything for dinner, and hubby suggested that we order pizza in. Argh!

Knowing full well that I didn’t want pizza, when Angel asked me what I wanted, I said “Mushroom pizza.” It was like a robot took over my body. Then as an afterthought I asked him to get me a side of spaghetti with marinara sauce. He also ordered garlic knots.
My plan was to take a bite or two of the mushroom pizza and maybe a handful of garlic knots and then just eat some of the pasta. But I remember the tension in the room and the environment was uncomfortable.
My family is one of those families where we have politically diverse views. I generally enforce a rule of “No politics” during dinner, but somehow that evening I let it slide. As I listened to my husband and son’s raised voices, I could feel my body clenching. We had been having the same argument for more than 2 year.  I was getting so frustrated with my son for his views that opposed mine and my husband’s.
Almost as soon as I reached for the pasta, it was like all the noise in the room subsided. I stopped feeling angry with PT for voicing his opinion anymore. Before I knew it, I had mindlessly eaten almost the entire, I’m thinking 1 pound serving of pasta.
Within a few minutes of dinner, I was so exhausted, I actually had to lay down. After I woke up and spent the rest of the evening with the fam, I was still so tired. It felt like I had taken an allergy pill that caused drowsiness. It wasn’t a good feeling, and it made a big impression on me. I’m a major control freak and I don’t like the feeling of not being clear-headed.
Guided by that memory of feeling so tired that I couldn’t keep my head up, I planned my meals the following week to include many more vegetables.

I won’t rush and say that I’ll never again eat pasta or even pizza, I’m still eating and fully enjoying both of them. But now I am a lot more aware of the amount that causes me the feeling of heaviness and exhaustion. I also realize that I didn’t take care of myself by setting a clear enough boundary to reduce the stress before the meal. It was the conversation at the table that just was frustrating to me, and it was up to me to lay down the law and put an end to it.

Several years ago when my husband, Angel was diagnosed with Diabetes, I went out and bought the book, “Eat What You Love, Love What You Eat with Diabetes.” by Michelle May, M.D and Megrette Fletcher, MEd, RD, CDE.
After recommending it to several friends, a couple weeks ago, I was inspired to re-read it. Since reading it, I’ve been reminded to pay closer attention to how I feel when I am eating.

Reading that book has been slowing down the pace of my eating and helping me to be much more mindful and aware of the foods I choose and how they make me feel, good or bad. It’s a great book and I highly recommend it.

As I’ve shared before, at home, I tend to be a fast eater and I’ll usually finish my meal long before everybody else. But it surprises me how when we go out to lovely restaurants or I have lunch with a friend, that I can linger over the meal for hours and end up leaving the majority of my food uneaten. So reading the book has made me re-think my relationship to food and the reasons why I eat so fast when in the company of my husband and son. Here’s what I come up with: I’m not very good at dealing with conflict and confronting people, especially men whose opinions are different from mine feels uncomfortable. I get uneasy when tempers flare and voices raise, and it triggers my anxiety to eat fast.

I realize that in this case an ounce of prevention is worth a pound of cure. I put my foot down and demand “No politics or stressful conversation during our meal times.” Final.

Overall what I have discovered is that the biggest gift we can give ourselves is our own time and attention. Earlier that day, before the pizza and pasta disaster occurred I was watching another of Tony Horton’s workout videos with my son, PT. Tony was talking about his love of taking daily baths. He said that every morning he soaks in the bathtub for 15 minutes and that gives him a fresh perspective for his day.

So the next morning post pasta/pizza, I jumped into the bathtub and soaked for about 20 minutes. It was delightful. If you haven’t done it as a stress-reliever, you’ve got to try it. It’s amazing!

In fact taking long relaxing soaks in the tub has become one of my most favorite ways of unwinding. What do you like to do to relax and what have you noticed about how foods affect you? 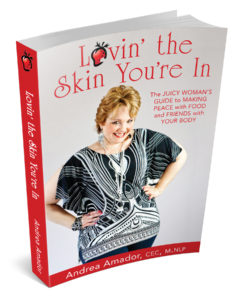 If you’re struggling with food and hating your body, only you can end the tug-of-war of shame and guilt and learn how to make peace with food and friends with your body. The only way you’ll learn how to master food is to stop trying to control it. I’ve come a long way since the days of diet-frenzied binges. Now I’d like to share what I’ve learned with you so you can put your crazy eating days behind you. Click on the link below to get the free download of my book,
Lovin’ the Skin You’re In