The Science Behind Why Self-Compassion is the Key to Creating a Healthy, Fit Body 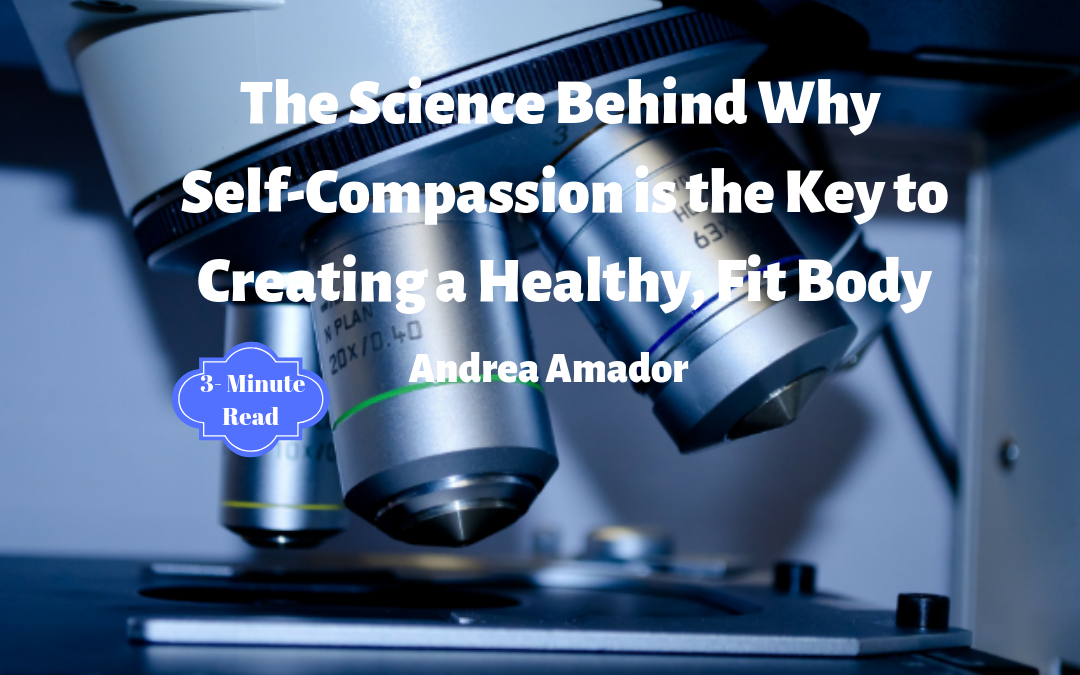 Are you feeling disgusted and frustrated with the way your body looks? Does it make you cringe each time you catch a glimpse of your fat or wrinkles in the mirror? Believe it or not your negative self-talk could be hurting you so much more than you think.

I know it’s really hard to understand why it’s so important to be nicer to yourself, because after all, if you’ve been taught that beauty only comes in one package, (and that ain’t yours), how can you love what you see in the mirror, if it’s so imperfect? Self-love. Blah, blah, blah. Sounds like a whole lot of lip service. Doesn’t it?

My experience of ending the years of deprivation

I started dieting when I was 10 years old. For all those years I deprived myself and I believed that I was a slave to my cravings. I was certain that no amount of food would satisfy me.

My clandestine history with food and my desperate pursuits of it, taught me that I could never trust myself around temptation. I was terrified of my ravenous appetite for nearly 35 years.  In 2006, when I 44 years old, I made the decision to stop dieting. Shockingly, that changed everything. I won’t lie. I still gained weight just as I feared, but I got incredibly, scrupulously discriminating. For a gal who once believed that she was a garbage gut, this was a huge step forward for me.

When I stopped restricting myself from eating the foods I wanted, I started to see food as just food. Most thrillingly, I also began to see through all the lies that I had been believing about myself. I realized that the mean things that I was used to saying to myself were not coming from me, they were coming from verbally abusive remarks that were a part of my past.

I didn’t believe that I deserved to love myself or be loved if I didn’t look and act perfect in every way. I was certain that the reason why I was miserable was because I was fat. I thought that I was fat because I had no discipline or self-control around food. Because my father and family made a huge deal out of my weight, I figured that meant that something was wrong with me.

I suppose you could say that things were a little twisted in my family. My dad’s way of expressing his concern was to use hurtful and shocking words to put me down and to make cruel comments about other overweight people in my presence. Now looking back on that time I realize that he was the one who had a problem with my weight, not me.

Sad thing is that somewhere along the way I picked up the bad habit of talking to myself in the same deriding, critical tone that my father used to talk to me. Can you relate?

Have you become your own worst critic?

Did you ever have an adult in your life who fixated on your weight and appearance, making you feel like you were always under a microscope? Criticism no matter how you slice it is hard. But to a kid, it’s really unfair because they’re defenseless and they can’t stand up for themselves. A lot of times kids just pick up the mannerisms and habits of the adults who raise them. Have you been trash talking your body?

You probably don’t realize it, but if you’re putting yourself down, you’re doing a whole lot of harm to yourself and your body when you let those nasty and self-critical “I hate my body” thoughts take over.

And here’s the crazy thing that I learned last year. If you have had a habit of trash talking your body and obsessing about your weight, when you start to notice signs of aging, your obsession will expand to include your wrinkles, skin tags, moles and dark circles. The body shame that you learned to feel about being overweight, will translate into feeling shame about aging. But you can put a halt to all these thoughts. Here’s why:

How do your negative thoughts affect your body?

The way you feel about yourself and your body is very important to your health and happiness because your emotions are so much more than just passing feelings. They are actually chemicals in your body.

Dr. Joe Dispenza is a neuroscientist, lecturer, & best-selling author of the books, “Breaking the Habit of Being Yourself and Evolve Your Brain.” He was also one of the featured scientists in the movie, “What the Bleep Do We Know!?

In the movie he explains that our emotions are chemicals and we can easily become addicted to feeling the same negative emotion over and over again automatically beyond our conscious awareness, because “nerve cells that fire together, wire together.

Here’s how your body works

Scientists have discovered that our bodies are made up of 50-100 trillion cells. And every one of those cells has up to a million cell receptor sites on the end of it. It’s the job of your cell receptors to absorb nutrients, proteins, vitamins and minerals to maintain a healthy balance for your body.

But because the brain can’t tell the difference between what’s really happening and what you’re thinking about, your body gets thrown off balance when an event happens.

An event could be something that happens to you, or someone close to you, you may hear about it, or see it. It could also manifest itself as a thought, a trauma, a surgical procedure or injury. All these situations are jarring to your body.

When these types of events occur it causes a part of your brain called the hypothalmus to release a cascade of chemicals called peptides. These peptides are short chain amino acids that our bodies experience as emotions or sensations. There are 32 different combinations of chemical emotions.

These peptides dock onto cell receptors inhibiting the natural absorbtion of nutrients and lifegiving vitamins, minerals and proteins. If the emotional chemical is not processed out of the cell receptors, this causes the cells to shrink up and die and they will eventually divide.

The body then manufactures more cell receptor sites for that particular peptide or emotion.

Most people are taught that they can reason their way out of any problem using their ability to think logically. But this is not the case with emotional events that have a physiological effect on your body.

When your cell receptors have unprocessed chemicals you feel terrible. You’ll be angry, sad, anxious, fearful, envious, suspicious, and many other emotions that just don’t make you feel happy.

No amount of thinking or mental leaps will make you change the way you feel for long. This is because the events that affect us happen to us on a physiological level, completely bypassing our conscious mind.

If you are trying to mentally change the way you feel by forcing yourself to think happy thoughts, it won’t work because your emotions won’t respond to logic. It’s like using a wrench when you really need a hammer. You need the right tool for the job.

How Self-Compassion Creates Health and Happiness

When your body is not being barraged by an accumulation of toxic chemical emotions, like anger, sadness or anxiety, you feel at peace and relaxed.

Most people believe that when we get sick, the problem can be sourced back to defective genes, or just a case of bad luck and to get fixed we have to find the right doctor.

For years, Lissa Rankin, M.D., thought the same thing.  But when she went through her own health crisis and her treatments failed to work, she decided to look beyond the box and explore other options.

Throughout her research and analysis of thousands of case studies spanning fifty years’ worth of medical records showing evidence of patients with chronic illnesses who experienced spontaneous self-healing, she discovered that a critical piece was missing in our health care system.

In her book, “Mind Over Medecine: Scientific Proof That You Can Heal Yourself,”Dr. Rankin shows how our thoughts, feelings and beliefs can change the body’s physiology. Using scientific data she proves that loneliness, pessimism, depression, fear, and anxiety harm the body, while loving and intimate relationships, gratitude, meditation, sex and authentic self-expression turn on the body’s self-healing processes.

Basically our bodies are equipped with two natural responses.

A relaxation response and a stress response. Which fuel would you prefer to run your engine?

You’ve probably read about me singing the praises of a needle-free acupuncture-based method of relaxation called Emotional Freedom Technique.

Tapping on certain acupuncture points is very effective in helping you to change the way you feel about anything that upsets you, because it stimulates your body’s natural relaxation response and makes you feel so good. And isn’t that what we all want?

Haven’t a clue of where to start with all this self-compassion stuff? I’m here to help. Join my 30 Days to Lovin’ the Skin You’re In Facebook group and I’ll get you moving along the right path. Click the image below to join: