For the Highly Sensitive Soul: 5 Tips to Make Your Sensitivity Work for You 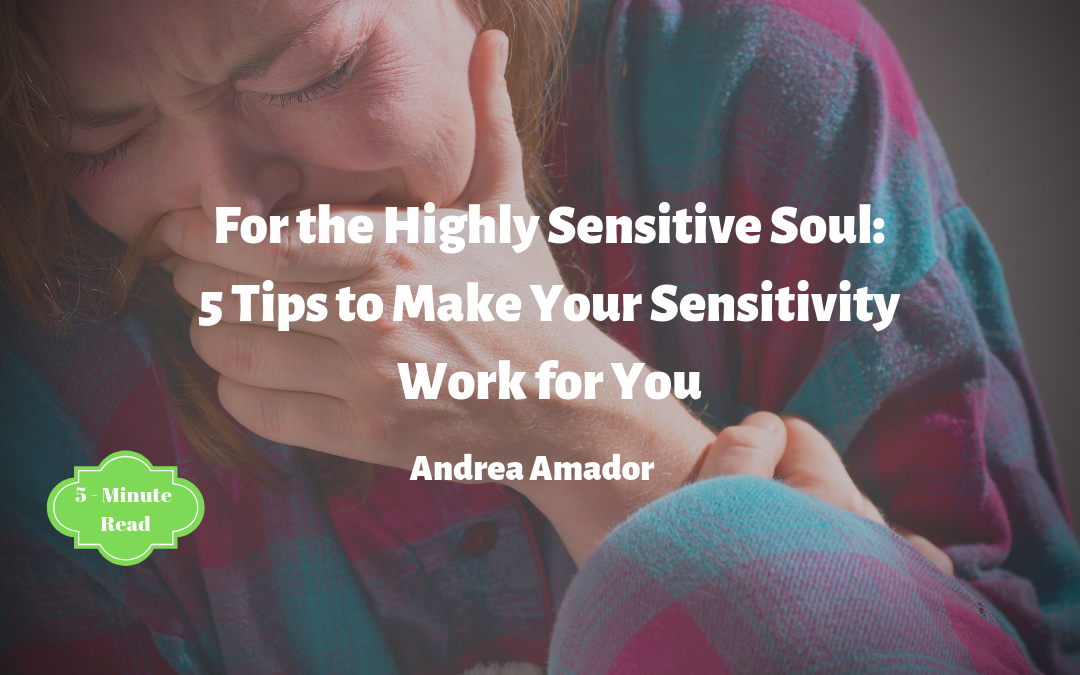 Have you been told that you’re too sensitive? Thin skinned? Do you cry easily or tend to over analyze things, avoid taking risks and get defensive easily? I don’t know about you, but for as long as I can remember, people have always told me that I’m too sensitive. Can you relate to my story?

My Heartbreak over Feeling Rejected by my Friend

Several years ago I had a friend named Sandra. We bonded quickly because our kids went to the same schools and we were neighbors. Because she was so nurturing and encouraging, I trusted her and we had many heart-to heart talks.

During that time in my life, I was going through a crisis with my father, and I leaned on her for emotional support. I knew she was having a hard time financially so I helped her any way I could. I lent her my car. I gave her money. I lent her a book. I felt like she was the sister that I never had.

One day Sandra told me that she was divorcing her husband and moving to Maryland with her kids. A month later she left. I went to visit her one weekend, and we had a fabulous time. I was thrilled that nothing had changed and that our friendship was still very much intact. But the next time I visited, several months later, she brushed me off, and made it clear that she was too busy to spend time with me. She was cold and distant. I could tell that our friendship had changed. She stopped returning my calls.

I sent her a gift for some occasion and she never acknowledged it. That was the Aha that told me I was being taken for granted. I got angry, and I sent her a message asking her to return my book. She refused saying that it had been lost and she felt that it should have been given as a gift. The book cost me $175. I asked her to replace it and pay me back the money. She refused and called me greedy. The emails stopped. More than the book, or any other material thing, I felt brokenhearted. I cried over the loss of her friendship for more than a month. I wondered what was wrong with me. I had never felt such agonizing pain before.

I was clueless, asking myself, “what, exactly, had I done?” Today, I get it. Sandra is an HSP (Highly Sensitive Person), and she was doing the best she could.

Highly sensitive people protect themselves in two ways. They either withdraw or attack. Maybe you find yourself withdrawing with one person and attacking another. I didn’t realize it at the time, but I discovered that I, too am an HSP and I learned how to identify those characteristics in myself and others.

Perceptive: The gift of being a sensitive person is that you are aware of subtleties that most people miss. You pick up on those voice tones, the sideways glances, the notes of emotion in people’s voices. You are receptive to being aware of feelings and sensations that give you valuable information.

Hardwired differently: HSPs are often written off with unkind labels like shy or neurotic. But this is far from the truth. They actually have a more heightened sensitivity meter and that they are able to effectively process more information than most people. They ponder over things, and analyze information very carefully before making a decision. They like to be alone to think. Because relationships are really important to them, they are really conscientious when it comes to remembering details like someone’s birthday.

Natural Leaders: In nature the animals with the strongest ability to sense danger and an energetic shift in the environment, would know intuitively to run for the hills and lead the pack to safety. Because HSPs are able to sense more information than most people, they are more aware of the big picture and able to make better informed decisions.

Empathetic: HSPs not only cry while watching a sad movie, but they actually experience grief symptoms. Because of their heightened ability to be sensitive to the internal and external world, HSPs can often get overwhelmed by strong emotions. They may also have strong reactions to noise and light and can be very sensitive to stimulants like sugar and coffee.

Survivors: HSPs have a highly developed internal world. They are highly creative and have active imaginations. In his book, “Man’s Search for Meaning, author and Holocaust survivor, Victor Frankl, noted that the more sensitive people were able to fare better than their tough on the outside counterparts, because they were able to rise above the physical experience of pain and cultivate the strength necessary to survive.

Want some extra support to learn how to manage your emotions so they don’t get out of hand? Come join me on Facebook in my 30 Days to Lovin’ the Skin You’re In Group. Click the FB icon to check it out.