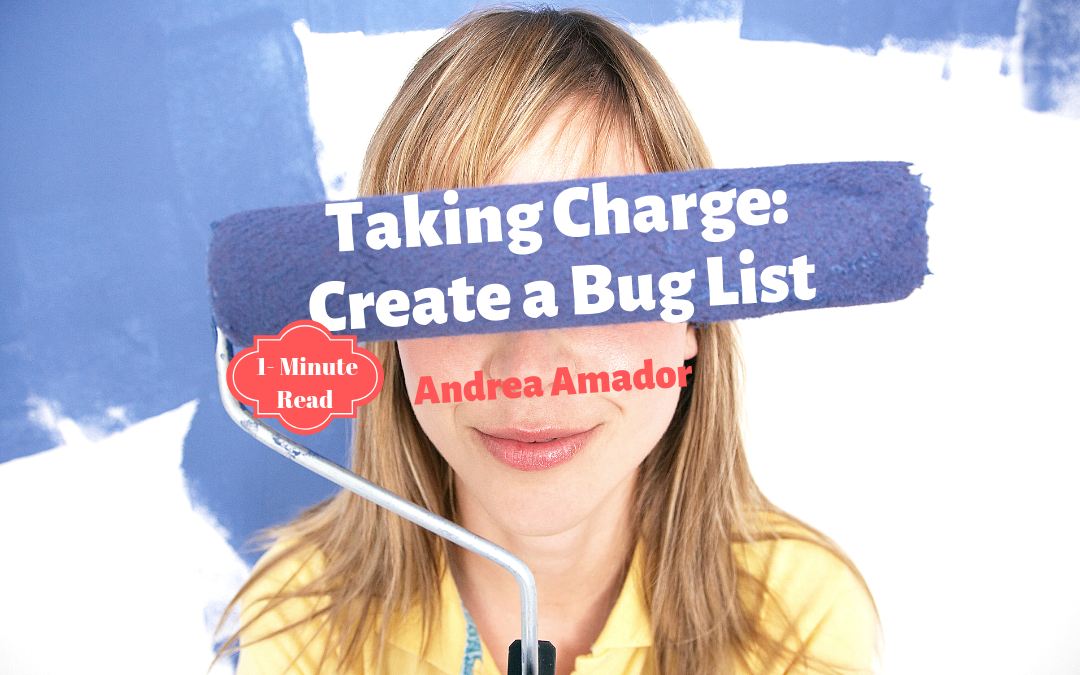 Self esteem comes from enjoying the triumph of having small accomplishments. When you take steps to change things in your life that bug you, you reinforce a message to your brain that you are worth it and that you value your peace of mind and happiness. That creates a ripple effect of happy chemicals that calm your body and give you a sense of well-being. When you’re in that “I’m worth it” mindset food loses it’s advantage in the emotional tug of war.

All too often we fall into patterns of tolerating things in our life that displease, bug and annoy us.

Whether they are a leaky faucet, a disorganized closet, a cluttered space, painting the spare bedroom, a broken bathroom tile, a dirty kitchen or a jacket in need of mending, the effect on your psyche is the same. It will make you feel overwhelmed and anxious.

Just like wearing too-tight clothes makes you feel fat, walking around your environment and seeing things that bring you down will make you feel pressured and frustrated.

When you find yourself trying to ignore the upset that you feel, living with these little buggers, sends a message to your brain that you are not worthy of having more. It also makes you feel like you’re out of integrity with yourself. Ignoring these frustrations, can feed into a negative self image and make you feel miserable.

That’s when you may become complacent and cajole yourself into believing that you are being too picky or difficult to focus on such small things. You don’t want to rock the boat and be a pain to make something an issue if its’ not. “Let’s let sleeping dogs lie”, you may say. But if it’s bugging you, it’s not contributing to your happiness, then it’s making you miserable.

You owe it to yourself to handle all the big and little irritations that annoy you. If you can’t handle the job yourself, then consider asking for help or paying to get the job done. Because if you don’t, those buggers will eat at you until you do. Before you know it, you’re picking at the frosting of a donut that you realized you don’t even like and eating everything in your path.

It’s been really hot where I live and I  notice that I have fallen back into a habit of eating more convenience foods. I’ve been a vegetarian for almost 2 years so vegetables are my main food source. One day a few years ago soon after my cat Owie passed away, I saw some images that were so disturbing and I haven’t eaten any meat since. But I do consume cheese and sometimes regular ice cream. As I learn more about the plight and suffering of animals, it’s becoming more emotionally painful having anything to do with any animal products.

So the occasional slices of pizza and dishes of ice cream I’ve been eating lately have been making me feel horrible and out of integrity with myself. It just kind of feels like sandpaper on my soul. Eating meat is just not right for me anymore. All of my family still eats meat, and I respect their choice. But for me, it hurts my heart too much.

By watching Youtube and following several favorite vegan cooks, I’ve learned to make some amazing meatless meals. But they take time, and if I’m overstressed and overworked (which I have been), I lose my sense of perspective and fool myself into thinking that quick and easy is the only way to go.

I’ve been craving salad and lighter foods, but I’ve been too lazy to go through the effort to do all the preparation. Arggh, cleaning out the refrigerator, tossing the oldies and moldies and washing the containers, and the veggies, peeling, chopping and ALL THAT PREP. But I’ve been thinking about IT, JUST not YET doing it.

Last night on his way home from work, my husband, Angel called and offered to pick up dinner at the local takeout Chinese. I knew I sounded less than thrilled.

When he came home he told me that earlier that day he had been to a local farm, and he brought me a couple of gifts. He presented me with a huge bag of fresh picked string beans, 2 gorgeous pints of big fat juicy blueberries and a fabulous head of iceberg lettuce. I squealed with joy.

My mouth was watering thinking about steaming the string beans to perfection, making a vinaigrette dressing of olive oil, lemon juice, garlic, sea salt and fresh cracked pepper and tossing the warm string beans with my homemade vegan parmesan cheese made of blended almonds, cashews, spices and nutritional yeast, (a horribly named ingredient which has a cheesy flavor).

But the laziness rattled around inside of me again. My hunger made me quickly push my foodie thoughts away. And I sat down to a less than ideal dinner of sauteed broccoli and rice, and a spring roll. Blech! Another quick takeout meal from the local Chinese. I usually really enjoy it, but my resistance was so high. I ate less than half of it. I was so disappointed and felt incredibly unsatisfied. After dinner I thought a lot about what I would prefer instead. String beans, salad, blueberries. Oh My!

Embrace Your Resistance – It’s Your Key to Future Success

For the past year, I have made a daily habit of meditating at least once a day, sometimes twice or more. It’s truly become the key to my sanity. When I have an attack of negative thoughts, I’ll either meditate or take a nap. Both calm me down instantly.

Just before meditating this morning, I checked in with a friend of mine on Facebook. She was working on making big changes in her business and was feeling frustrated with herself because she was getting distracted and was having trouble settling in to work. She couldn’t understand why she was struggling with thoughts of self-sabotage. She told me it was really hot where she was and she couldn’t focus on working. She wanted to go to the pool and enjoy a swim.

I told her that was a wonderful idea and the best thing she could do to be kind to herself. After saying our Goodbyes, I set my timer for 20 minutes, turned on my rain sounds and settled happily into meditation.

When the timer went off, I smiled a big smile as I was reminded of our last conversation about self-sabotage. For years I used to be really hard on myself when I didn’t do the things I wanted to do. Now I’ve learned to think of self-sabotage, being resistant and backsliding as just another part of the process moving me from where I am to where I want to be. Years ago I heard comedian, Dana Carvey say that failure was like delayed success. I love that.

As I thought about my friend gliding through the cool water, I just knew that because she relaxed and took time for herself, by the time she got back she would be feeling amazing, recharged and ready to tackle anything.

I thought about my own situation and realized that I had gotten into a lazy habit of just grabbing a handful of nuts and making that a meal. Yesterday eating some cheesy Cheetos and a spoonful of ice cream was enough to bug me. Not because it was fattening or I felt regretful about making those food choices, but because I had seen another image that upset me yesterday and that made me feel horrible about eating the cheese and ice cream.

I thought about my friend enjoying her lovely swim. In that moment, I said to myself, Andrea, “what’s the kindest thing you can do for yourself today?”

Visions of the string beans, lettuce and blueberries came to mind. I saw myself doing a quick clean of the fridge, cutting up some veggies and making stuffed peppers and a salad. My first step was taking out the lettuce and cleaning it. Seriously maybe that took 2 minutes. I realized that I had really been overthinking this cooking thing. Then I jumped in.

Now about an hour later, I have a lovely tossed salad all prepped and ready for dinner and a casserole dish filled with  meatless sausage, rice and mushroom stuffed peppers. Later when I have a few minutes, I’ll pull out some of the string beans and blueberries and prep them to enjoy with dinner. It took some time doing the prep but I’m a lot happier with myself now. I’m guessing my friend feels the same way about her decision to stop working and take that swim.

Look around at your life and reassess it. Notice what irritates you and causes you frustration. Go throughout every room of your home and office and make a list of what bugs you.

Is it an overflowing closet that you avoid opening or perhaps a crooked picture that doesn’t hang straight on your wall? Start to take note of the things in your life that you have been saying, “Oh, it’s okay, I can live with it.”

Make a list of 100 of those things and each day commit to doing one small thing to eradicate those bullying buggers.